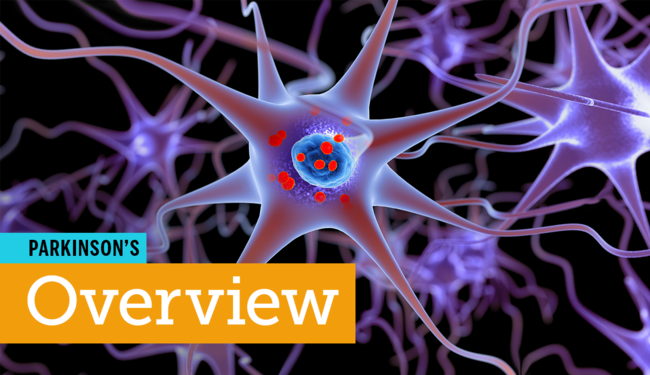 Parkinsonism is a syndrome, or collection of symptoms and signs, characterized by bradykinesia (slowed movements), tremors, loss of balance, and stiffness. The most common type of parkinsonism is Parkinson’s disease, which accounts for about 80 percent of cases. Other types of parkinsonism include drug-induced parkinsonism, multiple system atrophy (MSA), progressive supranuclear palsy (PSP), vascular parkinsonism, dementia with Lewy bodies (DLB), and corticobasal degeneration (CBD).

Other parts of the brain try to compensate for the lack of dopamine, resulting in more dysfunction.

Different types of parkinsonism can have different causes. Some people have a strong family history of Parkinson’s, and genetics play a role. Others develop parkinsonism after taking certain psychiatric, anti-nausea, or illegal recreational drugs. For most people, Parkinson’s is most likely caused by a combination of inherited predisposition and environmental risk factors such as head injuries and exposure to radiation or toxins. Read more about causes of Parkinson’s.

The History of Parkinson’s

As early as 600 BCE, medical texts from India described the symptoms of Parkinson’s disease. Ayurvedic (traditional Indian medicine) doctors prescribed powdered seeds of the velvet bean, which may have been effective – the bean contains a small amount of Levodopa, the most common treatment for Parkinson’s today. In Ayurveda, Parkinson’s is called kampavata, from the Sanskrit kampa, meaning “shaking,” and vata, meaning “lack of muscular movement.” In the West, Greek physician Galen described cases of “shaking palsy” as early as 175 CE.

In 1817, English doctor James Parkinson published "An Essay on the Shaking Palsy," in which he described cases of movement disorders he treated in his practice and witnessed among London citizens. Parkinson recommended bloodletting and inducing blisters on the neck as treatment. From 1868 to 1881, French neurologist Jean-Marie Charcot completed several studies that helped define the condition. Charcot also promoted the naming of the disease for Dr. Parkinson. Charcot and his team published papers recommending two plant-based drugs, belladonna and hyoscyamine, as treatments for parkinsonism. These 19th century medications are in the anticholinergic and muscarinic antagonist classes of drugs respectively; other drugs in these classes are still used to treat Parkinson’s.

German neurologist Friedrich Lewy discovered abnormal “spherical inclusions” in 1912 during autopsies of people who died with Parkinson’s disease. Now known as Lewy bodies, these deposits of alpha-synuclein (aS) protein are understood to be one of the most common causes of dementia in people with parkinsonism.

Starting in the 1950s, researchers began to learn more about the neurotransmitter dopamine, where it is made in the brain, and its role in motor and cognitive functions. This research led to the discovery that Parkinson’s was caused by dopamine loss. This led to the realization that Levodopa increased dopamine, making it a good prospective treatment for Parkinson’s. Levodopa was first given to people with Parkinson’s in 1961 and immediately proved extremely effective. Levodopa remains the gold standard of Parkinson’s treatment.

Since the 1990s, scientists have found several genes associated with the development of Parkinson’s. In 2002, deep brain stimulation was approved to treat Parkinson’s by the U.S. Food and Drug Administration (FDA). Experiments transplanting stem cells to produce dopamine have been promising, and clinical trials are underway to test the safety and effectiveness of this treatment.

How Common Is Parkinson’s?

How Does Parkinson’s Progress?

Parkinson’s disease is not a fatal condition. For the most part, people with Parkinson’s have similar longevity as people without Parkinson’s. Parkinson’s can shorten the life span by about two years on average due to an increased risk of falls and pneumonia from aspirated (inhaled) food. According to one study, the risk of an earlier death differs between types of parkinsonism:

Most people with parkinsonism die of the same conditions other people die of, such as cancer, stroke, and heart disease.

Kelly Crumrin is a senior editor at MyHealthTeams and leads the creation of content that educates and empowers people with chronic illnesses. Learn more about her here.
hug (37) like (81) comment (86)
sign up to view previous comments 1 of 86

Im already feeding him, it is safer,

Parkinson’s disease mainly affects the central nervous system (CNS), which is made up of the...

Parkinson’s disease mainly affects the central nervous system (CNS), which is made up of the...
read article >