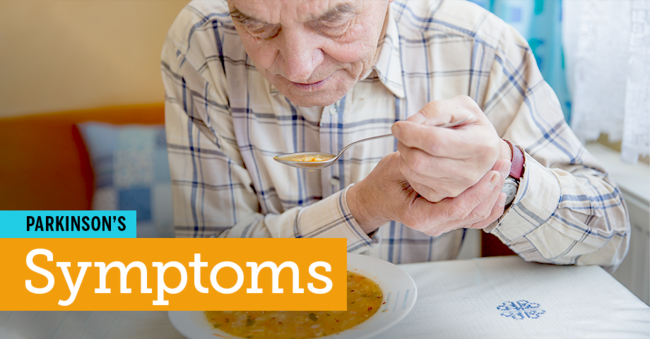 Parkinson’s disease mainly affects the central nervous system (CNS), which is made up of the brain and spinal cord. In Parkinson’s disease, the brain cells that produce a neurotransmitter (chemical that transmits nerve signals between cells) called dopamine begin to die off. As these cells die, levels of dopamine drop, and communication between the brain and the rest of the body is impaired. Researchers believe parkinsonian symptoms become apparent when about half the dopaminergic cells have been destroyed. Levels of other neurotransmitters rise to compensate for the loss of dopamine, causing more symptoms.

Medications and other treatments can help manage many Parkinson’s symptoms.

Symptoms of Parkinson’s vary by the type of parkinsonism and between individuals. An individual with Parkinson’s will not necessarily experience all or even most symptoms. Parkinson’s is a progressive disease, which means that symptoms worsen gradually over time, new symptoms appear, and disability accumulates.

Other motor symptoms of parkinsonism include:

Many people with Parkinson’s experience other types of symptoms in addition to motor symptoms.

According to studies, about 40 percent of those with Parkinson’s eventually experience cognitive difficulties. Cognitive changes, often referred to collectively as “cog fog” or “brain fog,” can include problems with memory, attention, processing information, finding the right words, slurred speech, learning and remembering new things, organization, and getting lost in familiar places.

Between 20 percent and 40 percent of people who take medications for parkinsonism experience a loss of connection with reality known as psychosis. Psychosis can either be caused directly by the disease or as a side effect of treatment. Psychotic symptoms can include:

Decreased sense of smell is very common and often among the earliest symptoms of Parkinson’s. Approximately 96 percent of people newly diagnosed with Parkinson’s show a loss of sense of smell. Some people with Parkinson’s experience vision changes, including blurred vision, double vision, loss of sensitivity in the perception of color and contrast, and visual hallucinations. The sense of taste may also be affected by parkinsonism.

Parkinson’s and medications for the condition often cause changes in mood and can affect personality traits. Psychological symptoms of Parkinson’s can include:

Fatigue is common in Parkinson’s. Fatigue may not be caused directly by Parkinson’s, but stem from other symptoms, including motor difficulties, sleep problems, and depression, or be among the side effects of medication for parkinsonism.

Problems with sleep are widespread in people with Parkinson’s. Sleep disturbances are the most common sleep symptom, but insomnia, restless legs syndrome, nightmares, and difficulty turning over in bed are also experienced.

Gastrointestinal (GI) symptoms, especially constipation, are among the most common Parkinson’s symptoms.

Bladder dysfunction is common in Parkinson’s. As many as 50 percent of those with advanced Parkinson’s report overactive bladder.

Pain in Parkinson’s disease comes in many varieties. Although Parkinson’s is not widely considered a painful disease, it can cause muscle pain from cramps and repetitive movements, neuropathy (nerve pain, or pins-and-needles numbness sensation), shooting pain such as sciatica, or a sharp, burning pain. Pain usually occurs on the side of the body most affected by Parkinson’s symptoms.

It is common for people with Parkinson’s to experience sexual dysfunction. Parkinson’s causes lowered libido and difficulty orgasming in both sexes. Motor symptoms can also make physical aspects of sex problematic. In men, Parkinson’s leads to erectile dysfunction and ejaculation problems. In women, decreased arousal, vaginal dryness, and pain with intercourse occur. In about 1 percent of people with Parkinson’s, medications cause hypersexuality — compulsive sexual behavior.

What Are the Early Signs of Parkinson’s?

Parkinson’s begins differently for each person. Researchers theorize that constipation and loss of the sense of smell are often experienced years before any motor symptoms, although they are seldom thought symptoms of Parkinson’s at the time. Many people notice sleep disturbances, micrographia (handwriting becoming smaller), mask-like facial expression, pain, or softer, quieter voice first. Others notice motor symptoms such as stiffness, tremors, or trouble walking or moving. Some people experience multiple symptoms at once.

Men are nearly four times as likely as women to develop Parkinson’s, and the genders may experience Parkinson’s in different ways. Studies have shown that women develop Parkinson’s about two years later than men. Women are more likely to experience tremor as their first motor symptom, while men more often present with stiffness and bradykinesia (slowed movement). Nonmotor symptoms differ between men and women, too. Women are more likely to report mood changes, fatigue, pain, and constipation, while men reported higher incidences of sexual dysfunction, loss of smell and taste, drooling, and sleepiness during the day. Dopaminergic medications — drugs that influence dopamine levels — may be less effective in women, and women are more likely to develop dyskinesia (involuntary writhing, swaying, fidgeting, or bobbing movements) as a side effect of these drugs.

Kelly Crumrin is a senior editor at MyHealthTeams and leads the creation of content that educates and empowers people with chronic illnesses. Learn more about her here.
hug (46) like (114) comment (92)
sign up to view previous comments 1 of 92

Parkinsonism is a syndrome, or collection of symptoms and signs, characterized by bradykinesia...

Parkinsonism is a syndrome, or collection of symptoms and signs, characterized by bradykinesia...
read article >