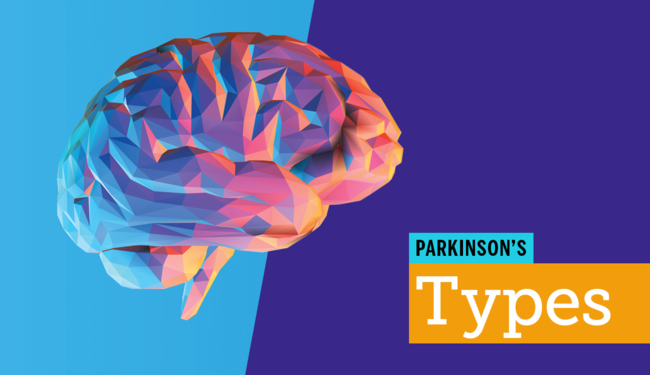 Parkinsonism is a syndrome, or collection of symptoms, characterized by motor issues – bradykinesia (slowed movements), tremors, loss of balance, and stiffness. There are many types of parkinsonism classified by their cause and how they progress. Knowing which type of Parkinson’s someone has helps neurologists prescribe effective treatments and better predict how the disease will progress.

There is no conclusive test to identify what type of parkinsonism someone has. For some people, years may elapse between experiencing the first symptoms and receiving a definitive diagnosis of a specific type. Since all parkinsonisms share similar motor symptoms, Parkinson's diagnosis can be very difficult. A correct diagnosis is more likely when performed by an experienced neurologist who specializes in movement disorders. Some people have multiple chronic conditions, making it difficult for doctors to identify whether parkinsonian symptoms are caused by a disease or a medication. In some cases, it is possible to have more than one type of parkinsonism.

Subsets of Parkinson’s disease include:

Certain medications can cause parkinsonian symptoms as a side effect. Drug-induced parkinsonism is the second-leading cause of parkinsonism after Parkinson’s disease.

Drug-induced parkinsonism may be caused by a range of medications, including:

These drugs do not cause parkinsonism in every person who takes them.

Typical Parkinson’s medications do not improve symptoms of vascular parkinsonism. Treatments are aimed at preventing additional strokes and may include Aspirin or blood thinners and recommendations to stop smoking, eat a diet low in salt and saturated fat, and get more exercise.

Multiple System Atrophy (MSA) is a rare condition with about 1,900 new cases diagnosed each year in the United States. MSA is also known as Shy-Drager syndrome. MSA seems to affect men and women at equal rates. MSA has motor features in common with other types of Parkinson’s but is more likely to present with symptoms related to the autonomic nervous system. The autonomic nervous system regulates blood pressure, digestion, and temperature, and people with MSA are more likely than those with Parkinson’s disease to experience bladder or bowel problems, excess sweating, and orthostatic hypotension (fainting or dizziness after standing).

In MSA, an abnormal protein called alpha-synuclein builds up in regions of the brain including the basal ganglia, the cerebellum, and the brain stem. The alpha-synuclein buildup also occurs in Parkinson’s disease, but is usually seen later in the course of the condition, and is mostly confined to the substantia nigra region of the brain. MSA affects different types of brain cells than those affected by Parkinson’s.

There are two subtypes of MSA:

Also known as Steele–Richardson–Olszewski syndrome, progressive supranuclear palsy causes motor symptoms very similar to those seen in Parkinson’s, but they tend to be much more severe and progress much more quickly. Most people develop severe disabilities within three to five years of a PSP diagnosis.

In addition to motor symptoms, people with PSP are likely to have mood and personality changes and cognitive difficulties. Tremors are rare in PSP. In progressive supranuclear palsy, people are more likely to tilt and fall backward, while people with Parkinson’s lean and fall forward.

PSP is also considered a type of frontotemporal dementia (FTD), a collection of conditions that cause progressive damage to the frontal and temporal lobes of the brain. In healthy brains, there is a normal protein called tau that helps form the structure of cells. In PSP, tau protein tangles together in abnormal clumps, and brain cells are destabilized.

Unlike other forms of parkinsonism, PSP can significantly reduce life expectancy. With treatment, a person with PSP may live 10 years after diagnosis.

Dementia with Lewy bodies (DLB) is characterized by the early development of cognitive symptoms (related to memory, attention, and thinking) and psychotic symptoms such as hallucinations. Parkinsonian motor symptoms occur later in the progression of the disease. After Alzheimer’s, DLB is the leading cause of dementia. DLB typically does not occur before the age of 65. In DLB, alpha-synuclein protein builds up throughout the cerebral cortex of the brain, forming collections called Lewy bodies.

DLB is often misdiagnosed as Alzheimer’s. Symptoms of DLB may respond to medications for Parkinson’s or Alzheimer’s, but certain Alzheimer’s medications carry high risk for dangerous side effects if given to those with DLB. DLB and Parkinson’s disease dementia have many features in common, and together they are known as the Lewy body dementias.

Corticobasal syndrome (CBD) is a rare type of parkinsonism that usually progresses more quickly than Parkinson’s disease. In CBD, brain cells in the cerebral cortex and the basal ganglia shrink and die. CBD affects men and women approximately equally. Symptoms usually begin between the ages of 50 and 70. Corticobasal degeneration may be considered a type of FTD.

Motor symptoms in CBD are nearly always asymmetrical – occurring on one side of the body. CBD may also cause cognitive and behavioral symptoms. People with CBD may also have Parkinson’s disease, dementia with Lewy bodies, progressive supranuclear palsy, FTD, and Alzheimer’s-like dementia. Parkinson's - The Path to Diagnosis Despite advancements made in understanding Parkinson’s disease and the development of effective...

Despite advancements made in understanding Parkinson’s disease and the development of effective...
read article >