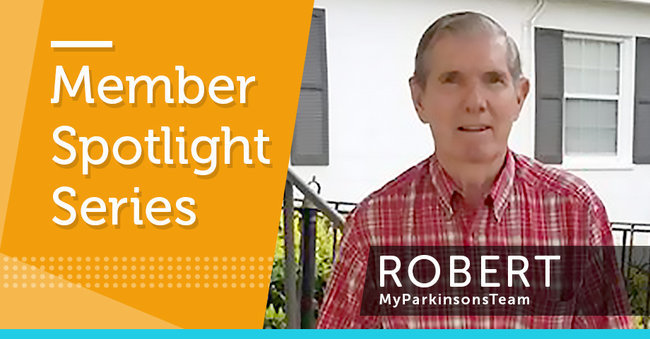 The day I was diagnosed with Parkinson’s was probably the biggest downer I have ever experienced. The neurologist sat across his desk, looked at me, and stated, “The bottom line is you’ve got Parkinson’s disease. It’s not a death sentence, but it is a life sentence. You won’t die from it, but in less than five years your life will have no desirable quality remaining.” I was not expecting good news. Even so, to hear the words blurted out like that was a shock to my system. I have always had a positive attitude, but this news was so negative that I had a huge pity party for all of two days. I also have strong faith in God, and as I awoke the third morning, imagined or real, I heard God speaking to me, “You aren’t dead yet. Get up and live your life.”

Since that morning, Parkinson’s has meant, first, accepting the fact of having the disease but not passively accepting all the things it could entail. Second, it presented me with a new challenge in life. Throughout my life I have grown accustomed to facing challenges, and I am determined to face the challenges the symptoms Parkinson’s can present. To successfully meet the challenge, I had to reject the thought my life was over, but rather determine to live my life to its fullest, as long as I can. In order to accomplish that, there was the matter of educating myself about PD as I knew very little about it, except that it was a disease you didn’t want. I would need to study the numerous possible symptoms to learn in advance what might be done to avoid any of them, as well as medications to treat them or how I might minimize their effect.Having Parkinson’s meant changes would most likely be taking place in my life, and they have and are—some good, some bad. At the time of my diagnosis in April 2000, I had been divorced and living alone for about 10 years, was lonely, but not seeking a wife. The Lord brought a wonderful widowed lady into my life. We met in church, had our first date May 17, 2001, and were married Aug. 24, 2001. In 2005, almost exactly five years from the day the neurologist told me that in less than five years my life would have no quality, we took a 16-day, 5,000-mile tour of 12 states. I drove all but 30 of those miles.I’ll mention another instance of Parkinson’s opening a door, enabling us to change a man’s mind about taking his life. A gracious lady, saying she wanted to do something for us, offered us free use of her cabin in the North Carolina mountains. While there, we stopped in an old-fashioned ice cream shop. We sat by a window overlooking the mountains and were talking about their beauty and how, to us, they revealed the majesty of God. As usual, we were talking about how God loves us and had blessed our lives. We and the man behind the counter were the only people in the shop. He began crying. We turned to look at him, and he said, “I guess you want to know why I’m crying.” We replied, ”Sure.” He said, “I have a loaded gun beneath my counter; I had decided life was no longer worth living and when I closed tonight, I was going to end it. But after hearing you talk, I thought back to better days and I’ve changed my mind and I’m going to live again and enjoy life.” We know by another person he did live. We were given use of the cabin because I had Parkinson’s.Parkinson’s meant many doors were opened for me to encourage and help people accept their diagnosis with less trauma. I would not have had opportunities to help others in their journey with Parkinson’s if I hadn’t had PD.To have any real success at having a higher quality of life means using the brain- power I have left. Our human brain is an amazing thing, capable of adjusting to many conditions we encounter. If we -study about the potential symptoms before they present themselves, we can develop “learned behavior” or “learned response” to the effect of the symptoms. To this end, I have accepted the challenge and have educated myself on every symptom listed anywhere. I have had some very positive results from recognizing symptoms as they began to present themselves, and have limited the effect of some and overcome others. The brain, like the rest of the body, must be exercised to retain its effectiveness.There are so many things, flowing through my mind that I could write about concerning my Parkinson’s disease. Parkinson’s has meant learning to adapt to changes, re-setting goals, and learning to ask for and accept help when needed to enable me to maintain my ability to live in my home. The Bible says pride goes before a fall, and often we must lay aside our pride by using a walking aid to prevent a fall.It has meant learning to cope with some negative issues, but there are so many positive things I have experienced; I am thankful it happened to me. It has been and may become more of a challenge, but I am committed to reaching for the highest quality I can attain at any stage of Parkinson’s I find myself.I credit several things for how well I am doing with Parkinson’s: excellent neurologists, supportive friends, effective meds, and three of the best daughters a father could ask for. My wife passed away in 2016, but my daughters are there. And my experiences since joining MyParkinson’sTeam have been a blessing beyond words. So many sharing, caring, and supportive people with PD and caregivers on the site. New friends I’ve made, even if long distance, feel like a great big family, all of whom I love!Above all I credit my positive attitude and unwavering faith in God.This article was written by MyParkinsonsTeam member Robert Alexander as part of the Member Spotlight Series. Robert is a naturally positive person and an eternal optimist who has been living with Parkinson’s disease since 2000.Do you want to be a part of the MyParkinsonsTeam Member Spotlight Series?Let us know here: support@MyParkinsonsTeam.com Acceptance: Realigning Expectations and Extending Grace to Ourselves MyParkinsonsTeam is quite a unique site in supporting those with Parkinson’s disease (PD). It has...

MyParkinsonsTeam is quite a unique site in supporting those with Parkinson’s disease (PD). It has...
read article >