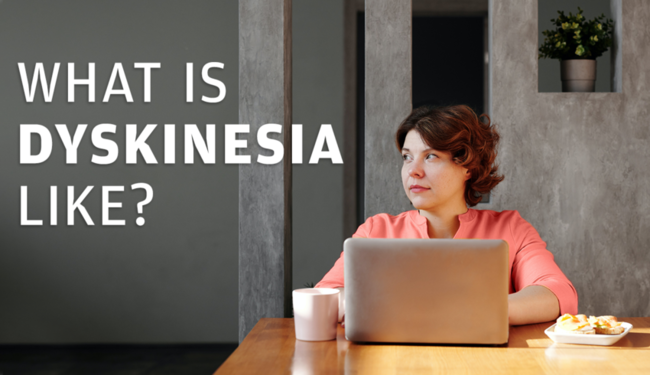 If you’re experiencing dyskinesia — jerky, involuntary movements of the face, arms, legs, or trunk — you’re not alone. More than 50 percent of people who are on long-term use of Levodopa —the most frequently prescribed drug for Parkinson’s disease — develop this disturbing motor complication. Women and people diagnosed with Parkinson’s before age 60 have greater risk factors for developing dyskinesia, according to the American Parkinson Disease Association (APDA).

Members of MyParkinsonsTeam who grapple with the erratic twisting, jerking, writhing movements or other motor symptoms of dyskinesia talk about how it disrupts daily activities and reduces quality of life.

“Dyskinesia can be really painful and upsetting,” remarked one member. “When it hits, I can’t enjoy anything I’m doing — it completely takes over. Some days are worse than others, but it’s difficult to plan activities,” shared another member, echoing the frustrations of others.

Dyskinesia typically occurs after a few years of Levodopa use and may affect people in different ways. Symptoms can range from mild to severe, affect one body part or the entire body, and produce a variety of movement disorders. Members of MyParkinsonsTeam describe dyskinesia in their own words:

Jerky movements are common. “Mine is like restless leg syndrome,” said one member. Another said, “Muscle contractions twist me into a spin and I fall like a brick.”

Some members experience a swaying motion. “I feel like I’m on a boat rocking back and forth,” explained one. “I’ve almost fallen over while ‘standing still,’” said another. “I put on music and go with the flow,” shared a member. “It’s my dancing dyskinesia.”

Dyskinesia can start and stop suddenly or last for hours. “I go from no movement to too much movement,” said one member. Another admitted, “I prefer dyskinesia to not being able to move at all. That feels like being buried alive with your head sticking out.”

Pain is not typically associated with dyskinesia, but abnormal movements can cause harm to people with Parkinson’s disease or their loved ones and caregivers. Members report hitting their arms or legs against walls or sharp objects, kicking or punching partners in bed, or dropping hot liquids.

What Makes Dyskinesia Worse for Members

People with Parkinson’s disease lose brain cells that produce the chemical dopamine. Levodopa therapy relieves Parkinson’s symptoms by temporarily replacing dopamine, but fluctuating levels of Levodopa cause dyskinesia as a side effect. This fluctuation is believed to contribute to the motor complications that characterize dyskinesia. 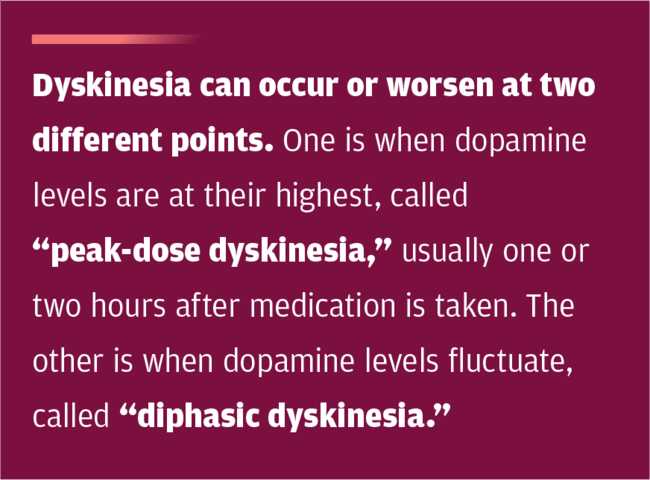 “I start to feel dyskinesia about a half-hour to an hour after my morning dose,” said one member, whose symptoms subside after two hours. “Mine hits whenever the meds are wearing off and can last up to two hours a stretch,” explained another. “My symptoms are worse in the afternoon and evening (since I’ve already ingested more doses of meds),” said one member.

Some members of MyParkinsonsTeam said dyskinesia lessened or stopped when their neurologists reduced their Levodopa dosage or prescribed an FDA-approved drug to treat it — such as Gocovri, an extended-release formulation of the drug Amantadine.

Lowering dosages of Levodopa and other Parkinson’s medications that treat Parkinson’s-related tremors, however, has its downside. “I have less head movement, but more hand tremor. It’s a trade-off,” lamented one member. Another said, “I’m having very little dyskinesia, but the tremors are bad. There’s no happy medium, but dyskinesia is worse.”

“Relief from dyskinesia comes at a cost, because the lower dosage causes an increase in movement issues, but the relief is worth it,” summed up one member.

Other factors that aggravate members’ dyskinesia include fatigue, anxiety, and stress. “When I’m in an environment that makes me uncomfortable, anxious, or stressed — or have lack of sleep — it sets off my symptoms,” said one member. “My husband gets symptoms when he’s overstimulated, on the high or low end of his emotions, or in hot or cold temperatures,” said another. A third member blames the weather: “My dyskinesia has been driving me crazy lately. I think it’s all the rainstorms we’ve been having.”

Moderate-to-severe dyskinesia can disrupt normal functioning and affect daily life. The following areas have been impacted for members of MyParkinsonsTeam:

People with Parkinson’s disease often have trouble sleeping. Getting a poor night’s sleep is also a common consequence of dyskinesia. “My legs jerk as I’m nodding off to sleep. Sometimes it feels as if my whole body is being lifted off the bed,” said one member of MyParkinsonsTeam. “I thrash about violently and make a strange noise like ‘The Exorcist’ that can last all night,” revealed another.

Nocturnal movements affect partners, too. “I sleep very lightly for fear of being hit, kicked, and screamed at by my husband. Sometimes, I go into another room because it’s just not safe to stay,” shared one woman. Another with a similar issue lamented, “Sadly we can no longer sleep in the same bed.”

Some members use dyskinesia to their advantage. “I keep busy when I’m affected by dyskinesia, but my family thinks I’ve gotten obsessed with housekeeping,” said one member. Another agreed, “I’ve also gotten more OCD around the house.”

Cleaning house, however, can have risks. “Not only do I tend to drop things, but uncontrolled jerks often cause me to hit a wall, chair, or table while doing housework,” said one member.

Driving with dyskinesia can also be dangerous, say members of MyParkinsonsTeam who are still operating vehicles. “The scariest time for my dyskinesia is when I get an unexpected jerk while driving,” admitted one member. “It can jerk me out of the center of my lane.”

Because dyskinesia causes people to move around so much, it can sometimes cause weight loss. Several members note they’ve dropped pounds since dyskinesia started.

“I have a huge problem with weight loss and have been told it’s from the dyskinesia,” shared one member. “Weight loss happens if you never stop moving 24/7,” added another. “My dyskinesia was so bad, I was moving non-stop and losing weight. If I lose any more, I’ll have to tie myself to the weights instead of lifting them,” said another member.

When symptoms start or are generally mild, they may go unnoticed, particularly among those who live alone. “I don’t notice the dyskinesia until someone puts their hands on me to stop my moving. Unfortunately, I live alone, so I don't always know these changes,” said one member of MyParkinsonsTeam.

Another member said, “Living alone makes it more difficult to monitor. I try to notice small changes and write them down in a journal with date, time, frequency, and what happened, to share with my doctor and neurologist.”

Despite the challenges of coping with dyskinesia, some members of MyParkinsonsTeam share ways they find healing humor in their condition.

You Are Not Alone: Finding Support for Parkinson’s and Dyskinesia

By joining MyParkinsonsTeam, the social network and online support group for those living with Parkinson’s disease, you gain a support group more than 63,000 members strong. Dyskinesia is one of the top 10 most discussed topics.

Here are a few question-and-answer threads about dyskinesia:

Here are a couple of the hundreds of conversations that have taken place on MyParkinsonsTeam about dyskinesia:

How does dyskinesia affect your daily life? Has your doctor or neurologist found the right medication regimen to reduce your symptoms? What helps you successfully get through each day? Share your tips and experiences in a comment below or on MyParkinsonsTeam. You'll be surprised how many other members have similar stories.

Oh Lord. Where is that great soul who finds cure for Parkinson's. Please do something.

posted about 1 month ago

Article written by Heather Lapidus Glassner As a result of the COVID-19 pandemic, people have...

Article written by Heather Lapidus Glassner As a result of the COVID-19 pandemic, people have...
read article >

Article written by Alison Channon Hallucinations and delusions are nonmotor symptoms of Parkinson...

Article written by Alison Channon Hallucinations and delusions are relatively common among people...

Four Books About Parkinson's Disease You Should Read

Thousands of members of MyParkinsonsTeam connect with one another and read each other's stories...

Four Books About Parkinson's Disease You Should Read

Thousands of members of MyParkinsonsTeam connect with one another and read each other's stories...
read article >

Article written by Mary K. Talbot Dopamine is a neurotransmitter that sends signals between nerve...

Article written by Kelly Crumrin Most people who begin Levodopa treatment for Parkinson’s can get...

Article written by Kelly Crumrin Most people who begin Levodopa treatment for Parkinson’s can get...
read article >

Article written by Kelly Crumrin According to the Centers for Disease Control and Prevention...

Article written by Kelly Crumrin According to the Centers for Disease Control and Prevention...
read article >

Setting Intentions for 2020 With Parkinson's Disease

Eat healthier. Exercise more. Learn a new skill. Pay off a credit card. Many of us have made...

Setting Intentions for 2020 With Parkinson's Disease

Eat healthier. Exercise more. Learn a new skill. Pay off a credit card. Many of us have made...
read article >

Raising Your Voice with Parkinson’s

“My voice gets thinner and softer as the day wears on.”- A MyParkinsonsTeam member“My speech is...

Raising Your Voice with Parkinson’s

“My voice gets thinner and softer as the day wears on.”- A MyParkinsonsTeam member“My speech is...
read article >