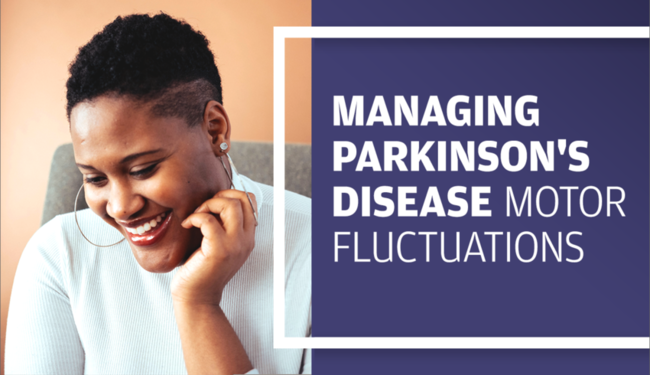 Dopamine is a neurotransmitter that sends signals between nerve cells in the brain. Dopamine is produced by cells in the substantia nigra region of the brain. In people living with Parkinson’s, the dopamine-producing cells die off as the disease progresses.

Levodopa is a medication given to replace the dopamine that is lost as Parkinson’s progresses. While the drug can be effective in controlling the symptoms of Parkinson’s disease, the level of effectiveness can vary. The effectiveness of Levodopa depends upon many factors, including how far the disease has progressed, how long it has been since a dose of Levodopa was taken, and what kind of food was eaten with the medication.

Levodopa helps you maintain control of your motor function. However, it is not a perfect replacement for naturally occurring dopamine, so the level and duration of control can vary. This variation is called motor fluctuation. The frequency and severity of motor fluctuations can be like a ripple in the water or a rolling wave. Sometimes motor fluctuations can be sudden; other times they’re like a slow undulation, depending upon the level of Levodopa reaching the substantia nigra region of the brain.

Dyskinesia, involuntary and abnormal movement such as twitches, jerks, and writhing, is a common complication of some Parkinson’s medications. The form dyskinesia takes is unique to each person with Parkinson’s and to the stage of their disease. For some, those movements can happen all day long. For others, it happens right after they take Levodopa. Dyskinesia often occurs at “peak dose,” when Levodopa levels are at their highest in the blood, about one to two hours after taking it. These involuntary movements occur with more frequency as the course of the disease progresses.

What Are Motor Fluctuations?

Lifestyle adaptations such as improving sleep habits, changing your diet, and lowering stress are often the first steps in managing motor fluctuations. Your physician plays an important role in finding the best medication and the proper dosing regimen to meet the symptoms of Parkinson’s that are unique to you.

Parkinson’s research has identified that regulating Levodopa levels in Parkinson’s patients is a key method to mitigate motor fluctuations. Dr. Peter A. LeWitt, director of the Parkinson’s Disease and Movement Disorder Program at Henry Ford Hospital, spoke on the topic at the Pan American Parkinson’s Disease and Movement Disorders Congress. Dr. LeWitt said, “For the most part, most motor fluctuations tend to be closely linked to the variable delivery of Levodopa to the brain, where, after a short delay, it undergoes conversion to dopamine. This neurotransmitter does not have long to carry out its intended signaling because enzymes and reuptake mechanisms quickly dispose of it. So, consistent delivery is the key for averting dose-by-dose motor fluctuations.”

While science is still steps away from finding an accessible, affordable, and convenient delivery system for Levodopa, there are current options available to help regulate motor fluctuations.

Using traditional Levodopa therapy, physicians can increase the dose of Levodopa or prescribe smaller, more frequent doses to level off the motor fluctuations. This strategy works for the short term, but must be frequently reexamined. The doses must be recalculated as the disease progresses and additional neuronal degeneration occurs.

Levodopa is most often prescribed as an oral medication in the form of a tablet. However, alternative delivery methods can improve its effectiveness in some people.

Duopa, a formulation of Levodopa and Carbidopa that is infused directly into the small intestine, has demonstrated dramatic improvements in off time and dyskinesia. Infusion therapy requires the surgical placement of a gastrostomy tube.

Inbrija, a form of Levodopa that is inhaled orally, may help avoid variability in gastrointestinal absorption and provide intermittent treatment of early morning “off” periods.

Pharmacological Add-Ons and Alternatives to Levodopa

There are several classes of drugs that work in addition to (or in place of) Levodopa to manage specific symptoms of motor fluctuations.

Deep brain stimulation is a surgical option that provides relief of symptoms for many patients without the motor fluctuations that occur with Levodopa. With this procedure, electrodes are implanted in an area of your brain that is targeted based on your symptoms. A small, pacemaker device (called an implantable pulse generator) is placed subcutaneously near your collarbone. When this generator is activated, it sends continuous electrical pulses, modifying brain circuitry in the targeted area.

Motor fluctuations are a life-changing side effect of Parkinson’s disease that can make you lose weight, affect your sleep, and impact your mobility, directly affecting your quality of life. Whether you’re writing a letter or enjoying a cup of morning coffee, experiencing these involuntary movements is disruptive. However, with proper medication management, they can be mitigated. Ongoing research through clinical trials provides hope that the keys to unlock the mysteries of Parkinson’s will be discovered. 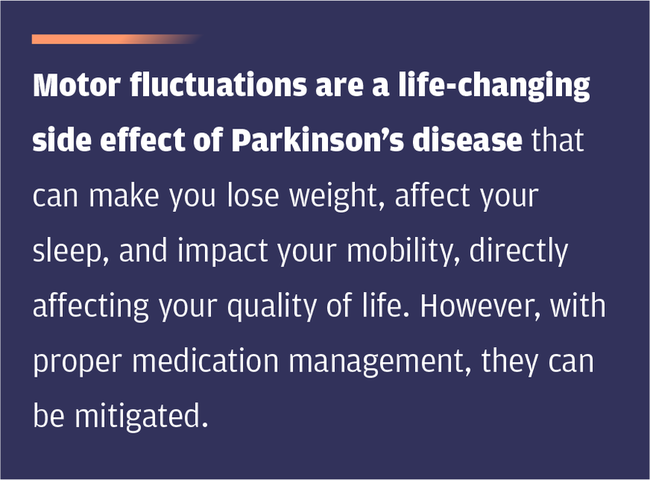 Mary K. Talbot is a graduate of Providence College (Rhode Island) and the Medill School of Journalism at Northwestern University (Illinois). Learn more about her here.
hug (28) like (112) comment (59)
sign up to view previous comments 1 of 59

I couldn't take them. I couldn't keep weight on me when I given those.